In January I decided I wanted to be me. 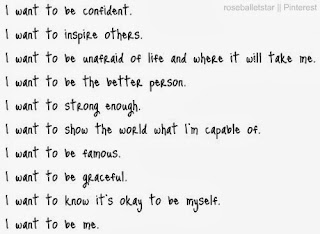 In February I talked about perfection and I wrote a poem for someone special. Perfection & A Poem For My Long Lost Crush

In March I cried, sobbed, and regretted (I guess that was a bad month for me). In April I swam with stars and talked about friends. In May I stayed true to my colors and tried to let go. In June I stopped and listened. In July I was reaching out, and searching for silver linings.

In August I talked about "being normal". In September I played hide and seek. 
In October I observed the observing and played with leaves. 
In November I shared with you a fictional character that is in development. 
In December I talked about fog and almost made a joke. The Fog & What's black, white, and read all over?

Where has the time gone?
2013 is leaving us!
And I don't know if I can say I'll miss it.
I desperately need a new start.
A fresh beginning.

Hello my readers! Gosh, I cannot believe it is already two days after Christmas. I would have posted yesterday but I was still recovering from...overbearing Christmas tiredness. I shan't bore you with the petty details of what I received or gave. But I will wish upon you a very merry, sorta late, Christmas. :}

Now with the holidays rapidly approaching and fleeing, I've been behind my computer screen, planning new things, assessing goals, evaluating my priorities and cleaning up my many blogs. I've already started planning posts for after the new year, adding new subjects I should write about, spiffing up the old ones, and all that lovely jazz. The funnest thing I've done though is create this lovely new design (internally squeals). I cannot wait till you guys see it. <-- I say that every time, don't I?

Now, this year I've decided to partake in the propositional part of New Years, in which I will establish myself some goals I will work to meet before 2014 is over. With that said, here is a list of blogging goals I have, for myself;

+ Create and establish a blog that is my own; a site where I can express myself openly and be my entire me without fear of judgement.

+ Become and even better writer; someone who can transform their thoughts and feelings into their words, and get their ideas out into their posts.

+ Include more photos. Whether they be my own--which I would love, but camera time is rare around here--or via a social media site, I'd like to spruce up the appearance of my posts.

+ Connect with my readers and fellow bloggers. This may be a huge challenge for me, especially considering my "isolational" tendencies but it's definitely something I want to work on. 
Her words were like music to his ears. Yet when the words were exhaled, curling out likes puffs of fog, released with her breath, everything around him got hazy. Confusion is what he felt. Confusion because he has heard theses words before. From another.
She inhaled, ready to release the words again, but he turned, striding away into the fog her words created. She screamed for him. Pleaded in a pitiful manner of longing. She wished to move from her spot but with the fog already curling around her she knew she'd lose herself. She'd lose herself and possibly him too.
So she let him go.

In this scene, the fog is a resemblance of the confusing chaos life decides to dish out to us. It clouds our vision, overtaking, curling around our bodies with long fingers, coaxing us to come closer. Some people think they're so smart, by avoiding it. They think they can just walk around the fog and avoid what hides behind it. But the smart people, they are the ones who walk head on into the fog. They're intrigued by the misty folds in the air and allow it to guide them to their better purpose.
Don't be like the girl. Don't hold back because you're scared. Don't hold back because you think by cheating the fog you'll gain something in return (the ability to see yourself, where you are--who you are). You'll only cheat yourself.
Walk into the fog.
I dare you.

Labels: by me, fog, writing

Where are you Christmas?

So today we're gonna talk about decorating cookie houses! I know, I know. You probably read the title and thought, "oh she's gonna post about..." whatever you thought I was gonna post about. o-O But don't worry, I'm getting there. Be patient.
Anyway, every year around Christmas time my grandmother builds small graham cracker house for my siblings, cousins, even my parents. Basically, anyone who'd like to participate in the decoration part of it. :)
And now I'd like to share with you some photos of my graham cracker house. 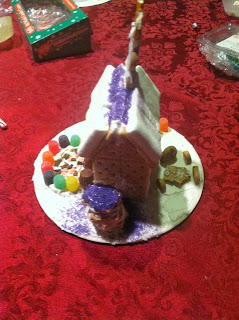 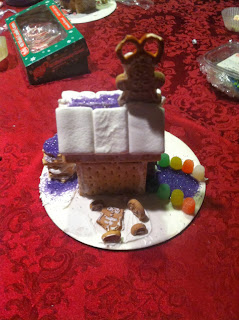 Ick. I'm sorry for the horrible quality but this is what my camera produced for me. Interesting, huh? Lemme explain to you what is happening. See that little gingerbread man on the roof, with the pretzel on his head? Yeah, um, now look below him, at the "ground". Do you see the broken cookie? Mhm, that was originally my cookie graveyard, but I developed the story of my roof man pushing his friend off the roof. #gruesome
Well, I guess someone wasn't in the holiday spirits, now were they? <-- and this is where my post title comes in.
This year, it definitely doesn't feel like Christmas. I don't know if I'm alone in this or what but the Christmas spirit just hasn't not reached me...yet.
Hopefully it will, soon, just in time for Christmas. It'll be my own, personal, Christmas miracle. :}
How are your Christmas spirits this year? :)

what's black, white, and read all over?

Inspirational nothings, my dear friends. Inspiration itself is nothing but what clicks in one's brain. If it clicks with them it may not click with you. But when inspiration comes it's like a tidal wave full of shining possibilities that won't end until your brain storming comes to a halt. Even as it stops, it's churning, still thinking, building up like music into this crescendo of what eventually evolves into your burst of creativity. It's like a cycle.

Labels: by me, inspiration, wha?, writing

Christmas is coming! :: Too fast, too fast!
Having no post inspirations. :: UGH.
SNL :: ...Y U SO STUPID?!
Ads :: So many ads and redirects; I think my computer is infested. -_-
When your dog decides to come into your room while you're asleep and sing to you. :: Why Monkey? Why? 1. the place where one lives permanently,
esp. as a member of a family or household.


“Home is the nicest word there is.” ―Laura Ingalls Wilder

I think, it's ready.

So, you know how I was working on writing a story/book? [ click here to learn more ] Well...I finished it. *squeals and dances around* I finished it! All this hard work is going to pay off! I don't care if it still needs some more editing. I don't care how much work there is to be done. It's [ALMOST] finished and I want to celebrate!

"How are you going to celebrate?" You may ask.

Well, I've decided to finally release something very special, that I believe is ready to be shown to you guys, my wonderful.

No one besides my flawless editor and I have ever laid eyes on this writing before (she hasn't read this part though. It's kinda new and...Kenz, we really need to catch up on some writing things. O_O) “She’s young.” He stated, nodding his head toward the glass that separated the two men from the powerful substance that may be their only hope. “But strong.”

The other man stayed unresponsive as he studied the person behind the glass. She was badly damaged, her head hit hard against something solid, but whatever was inside is still intact—just a little bit jumbled.

Both men studied the girl, watching the doctors assess the damage, scribble down notes, and seal up the wounds, a look of something that could only be described only as glee, sparkling in their eyes.

“Soon. Two weeks’ time, at least. But after that she will need help reorganizing what they have not removed.”

“They made sure she was empty?”

“Only of memories, as you requested.”

“Good. Hopefully the spunk will stay within her soul.”

They both turned their gazes back on the girl, her fingers twitching and the doctor’s scurrying to gather as many little data notes as they can.

“Yes. Two weeks. Then the plan shall begin.”

“Good.” The dark figure turned away, preparing to leave. “You best not fail me, Adrian.”

she's not here.
i'm not there.
i have to feel.
i do express.
i have to be sorry. “A dream is only a dream...until you decide to make it real.” ― Harry Styles via
Dark clouds swirled around the snow-capped peaks while the wind-whipped, stinging rain battered my face. It was that time again, when all of us shall be corralled into the one room we all dread, to be picked and chosen or left behind and lost. I mentally prayed that if he stayed behind, I'd stay with him, or maybe we'd both make it through. But luck hasn't been with us.
Luck was never with us.
Something sharp and hard hit my back and I sped up, moving into the center of the group, even though I suffered from a severe fear of suffocation within crowds. It was usually better to fear than to stick up for oneself, I learned. Especially in that time.
A door was opened up ahead, the light from inside the room that illuminated toward us made our futures seem promising and meaningful. But some of us wouldn't make it through the night and because of this we took hold of the bright lie, letting it warm us until were pushed away.
"One at a time." One of them called. He looked kinder than the rest, with softer eyes and relaxed features that welcomed you in. I got one of his beatings once. His appearances fooled me into believing his blows would be easier to take.
I chanced a glance at the peaks in the distance, watching the snow and rain mix into the sleet that stuck to my skin and little clothing I had. I tightened my shawl around my shoulders, breathing in the icy air before stepping into the vast warmth that was known as the room of death. My eyes met his from across the room and when he nodded, his cocky grin absent from his face, I knew something was wrong. His movements should've reassured me, like they usually did but that time they do not.
So I stepped up in line, turned to face the Chooser and prayed harder than I had before.

December means it's time to grow up.

What does December mean to you?

You've entered the part of the internet that changes people forever. MORE HERE.

Enter your email address to receive exclusive Self Known content!